Trading margined derivatives (such as futures) allows you to create leveraged positions, meaning you only need some of the notional value of an instrument to place orders on a market on Vega.

Margin is the amount of the settlement asset of the market required to keep your positions open and orders funded. You can think of margin as the 'down payment' to open a position. Leverage, meanwhile, describes how many times larger is the notional value of that position compared to the margin you have dedicated to it. For example, if you need 20DAI to open a position worth 100DAI: your leverage is 5x and your initial margin is 20% of the full value.

The exact margin requirements of open orders and positions are determined by the market's risk model and market conditions. The larger the position and the more volatile the market, the greater the amount of margin that will be set aside. The volatility tolerance of the market is driven by the risk model.

A trader's margin requirements in a given market are driven by their open volume and orders. They are recalculated based on market movements and changes to the open volume and/or orders. Orders that the increase your risk level of your position will require more margin, orders that reduce the exposure can be placed without any additional capital.

When a party on Vega opens a position, the minimum amount of assets required to open that position is put into a margin account for that party in that market.

Over the course of the position's lifetime, the margin requirements will likely change - the margin account may be topped up, and/or some margin is released back to collateral. If that party is trading on more than one market that uses the same asset, the collective positions on those markets will inform how much is set aside for margin. Margin balances are also affected by the price movements in the market where the position is being held. These hypothetical changes in a position's value are called unrealised profit and loss.

As markets and collateral are not managed through human intervention, markets must have certain automated processes that allow them to function well and assure that the collateral required to manage positions is available when it's needed.

There are a few mechanisms that work differently to how they would on a centralised exchange, in order to keep the markets solvent. They include:

Marking to market refers to settling gains and losses due to changes in the market value. Marking to market aims to provide a realistic appraisal of a position based on the current market conditions.

Margin is the amount of collateral required to keep your position open. It can change depending on how your position is impacted by your own actions and market movement.

The margin levels try to ensure that a trader does not enter a trade that will immediately need to be closed out.

When placing a party's (public key's) first order on a market: the protocol will calculate the initial margin required. If there is not a sufficient balance in the general account to fund this, the order will be rejected. If there is, these funds will be moved into a margin account for that market.

Once marking to market is finished, the protocol takes the current market price and recalculates every trader's margin requirements based on how their position is affected by price moves.

Vega's margining system provides automated cross margining. Cross margining, which means gains on one market can be released and used as margin on another, is supported between all markets that use the same settlement asset.

To more closely control how much is risked on a position, it's possible to replicate the effects of isolated margin by using one party (public key) per market.

The Vega protocol calculates four margin levels, which are used to determine when a trader has the right amount, too much, or not enough margin set aside to support their position(s). Those levels are: maintenance margin, initial margin, search level, collateral release level.

Throughout the life of an open position, the minimum required amount to keep a position open is called the maintenance margin. It corresponds to the minimum amount required to cover a position during adverse market moves within a given probability level.

The amount a trader will have held aside as maintenance margin is derived from the market's risk model. Specifically, it's based on a risk measure called the expected shortfall, used to evaluate the market risk of the position and any open orders.

If the margin balance drops below the maintenance margin level, the position closeout process gets initiated.

The initial margin level is the amount that will be transferred from the trader's general account to be used as margin when an order is placed or a trade is executed. The initial margin is more than the absolute minimum needed to support a position, as it offers a cushion to keep a position open as the mark price changes.

The initial margin level being higher than the margin search level (which itself is higher than the maintenance margin level) ensures that a small negative price move won't lead to a situation where the network has to attempt to allocate more collateral immediately after a trade has been entered into.

If the balance available in a trader's margin account is less than their position's margin search level, but is still above the maintenance level -- the network will try to allocate more money (up to the current initial margin level) from a trader's general account to be used for margin.

In most cases, the allocated margin should cover market swings so that collateral search is attempted first as described above, however in extreme cases the market move could be so large as to immediately proceed to the liquidation step.

If there is not enough collateral to provide the required margin, then the position will be closed out.

If a trader's margin balance exceeds the collateral release level, the position is considered overcollateralised. The excess money is released to their general account, to get their margin back to the initial margin level.

Those gains can then be withdrawn, or used to fund other trades.

The network calculates the overall long / short position including the submitted order. Depending on which one is larger a long or short risk factor is used for margin calculation. The maintenance margin (for futures) is then a product of the largest position, the corresponding risk factor and the mark price. Risk factors capture the outcome of the probabilistic distribution of future market moves, and are market specific.

Margins and credit risk ↗ - Section 6 of the protocol whitepaper. 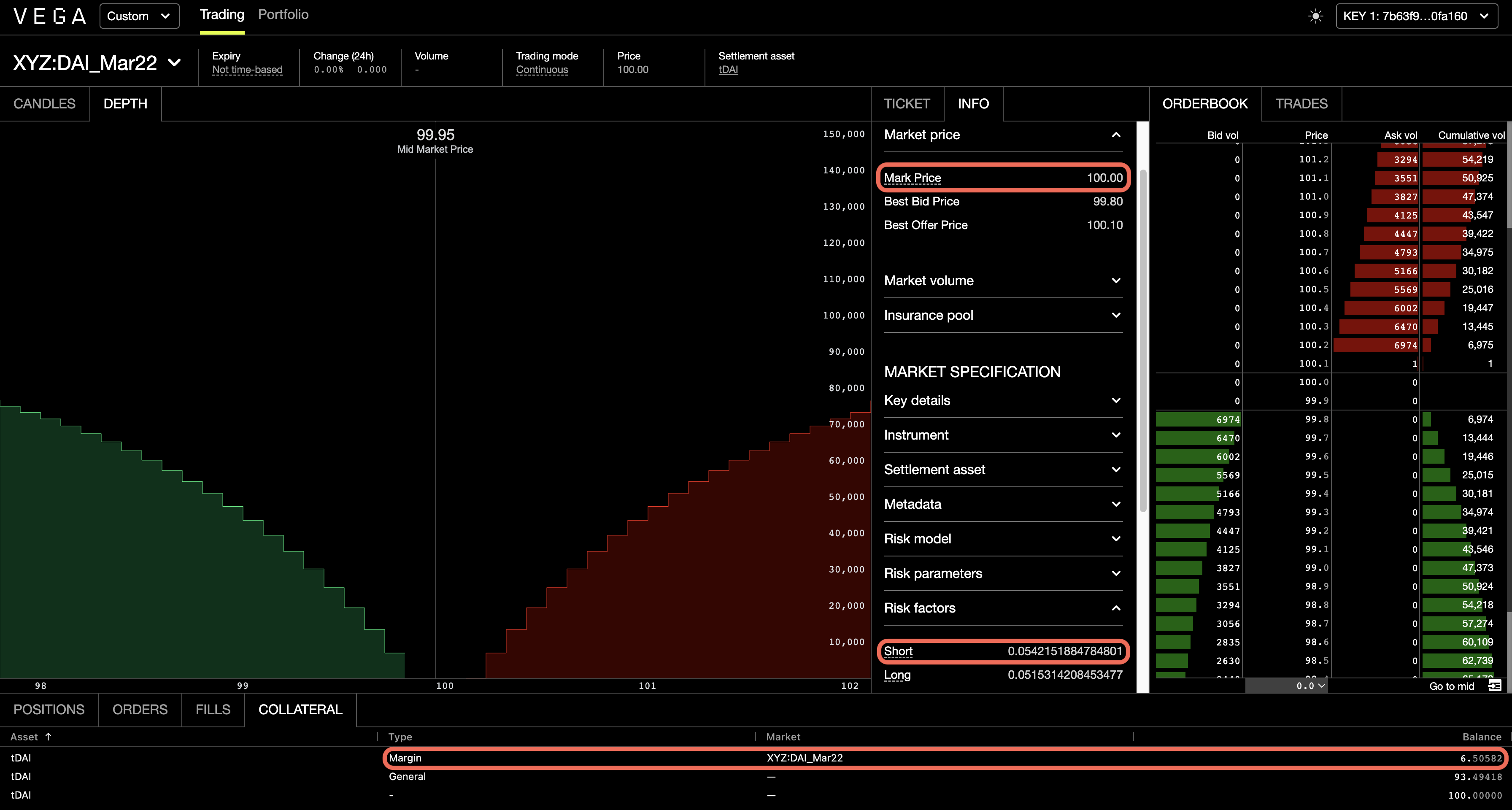 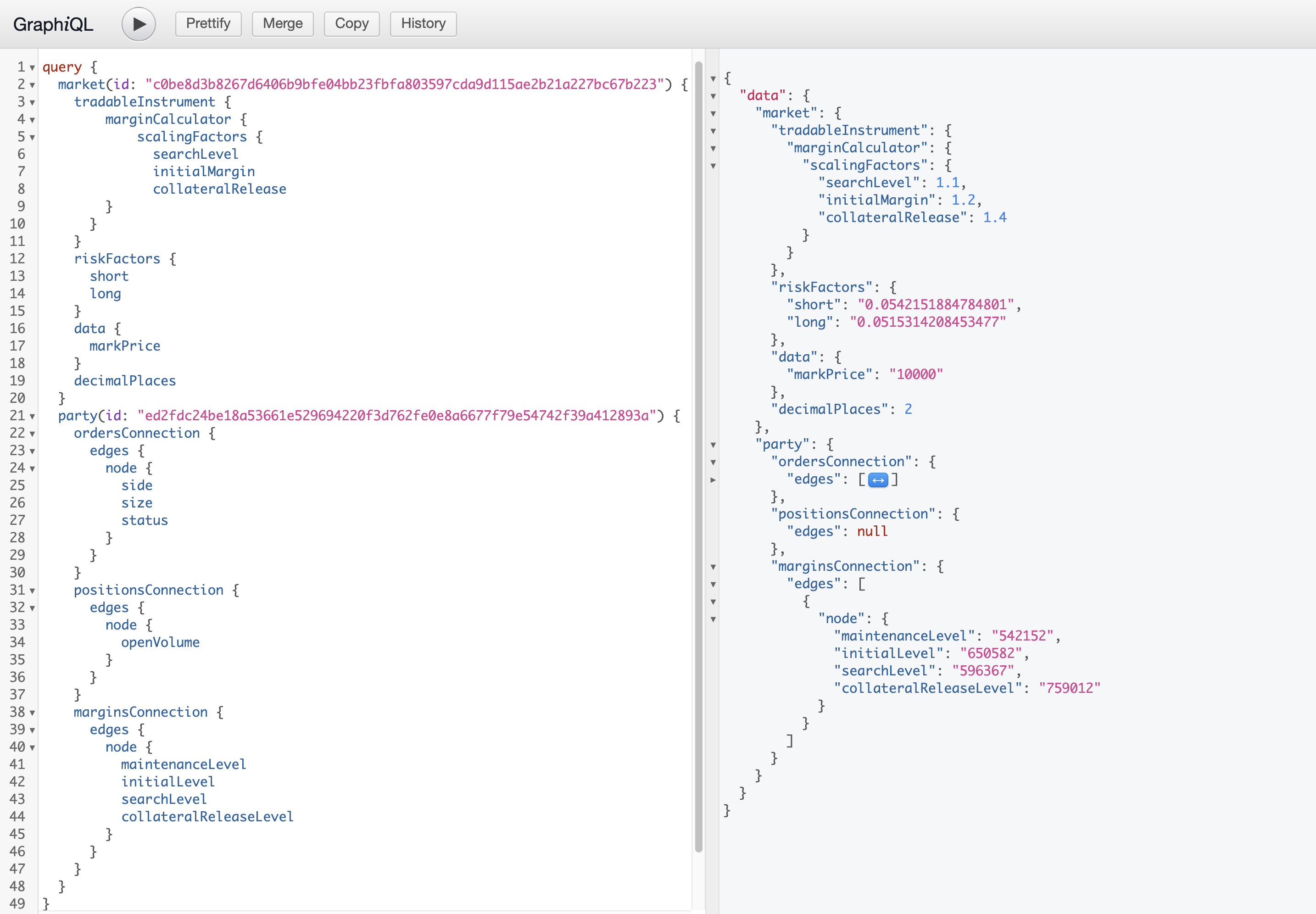 The following calculation takes into account 'slippage', as seen on an order book.

Other margin levels are derived from the maintenance margin using the scaling factors that form part of the market configuration.

Since the amount charged to trader's margin account upon order submission (6.50582 - see previous example) is still above the current (after the order gets filled and trader ends up with a short position of size 1) search level of 6.07964 = 1.1 x 5.52695, no further margin account balance changes are initiated. 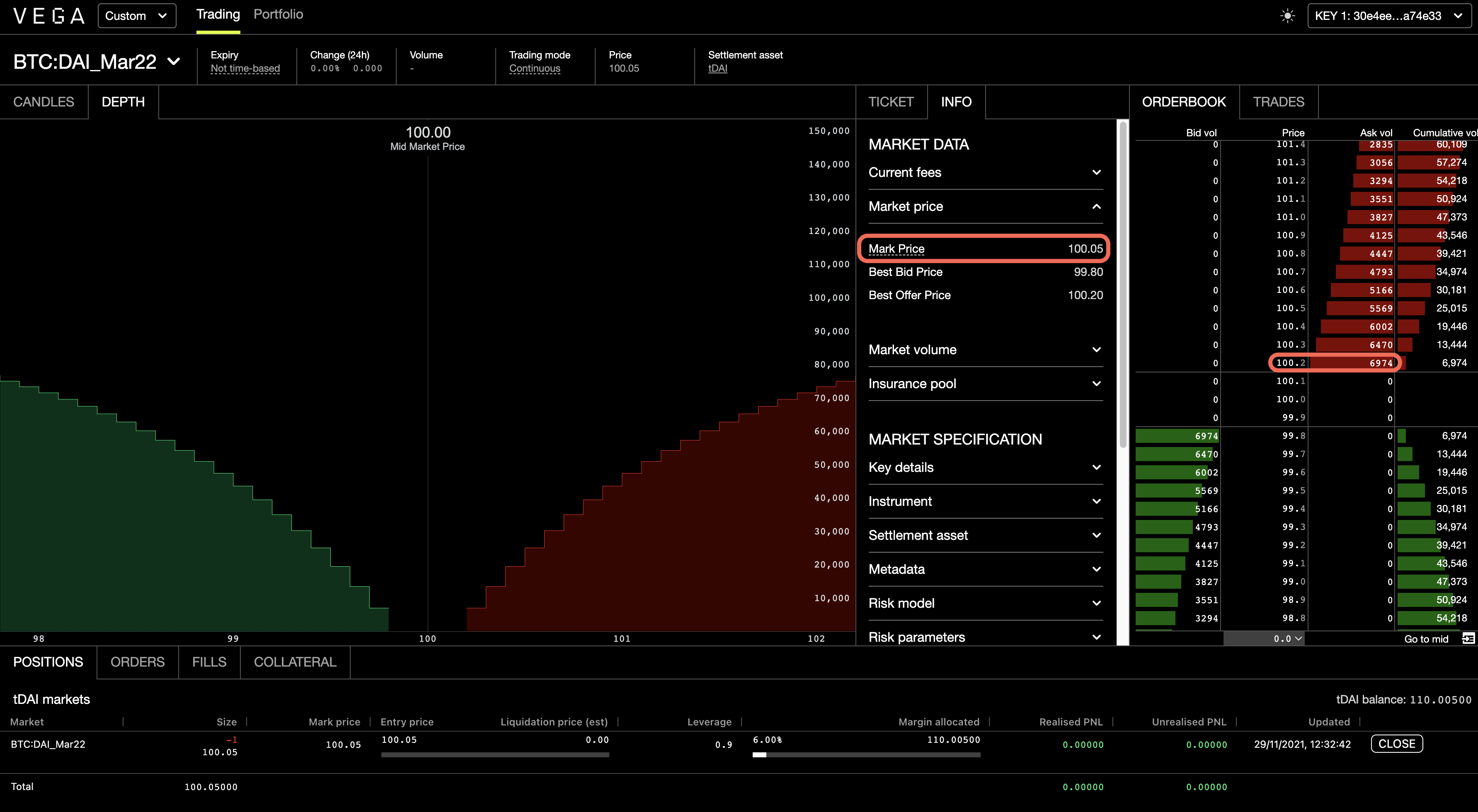 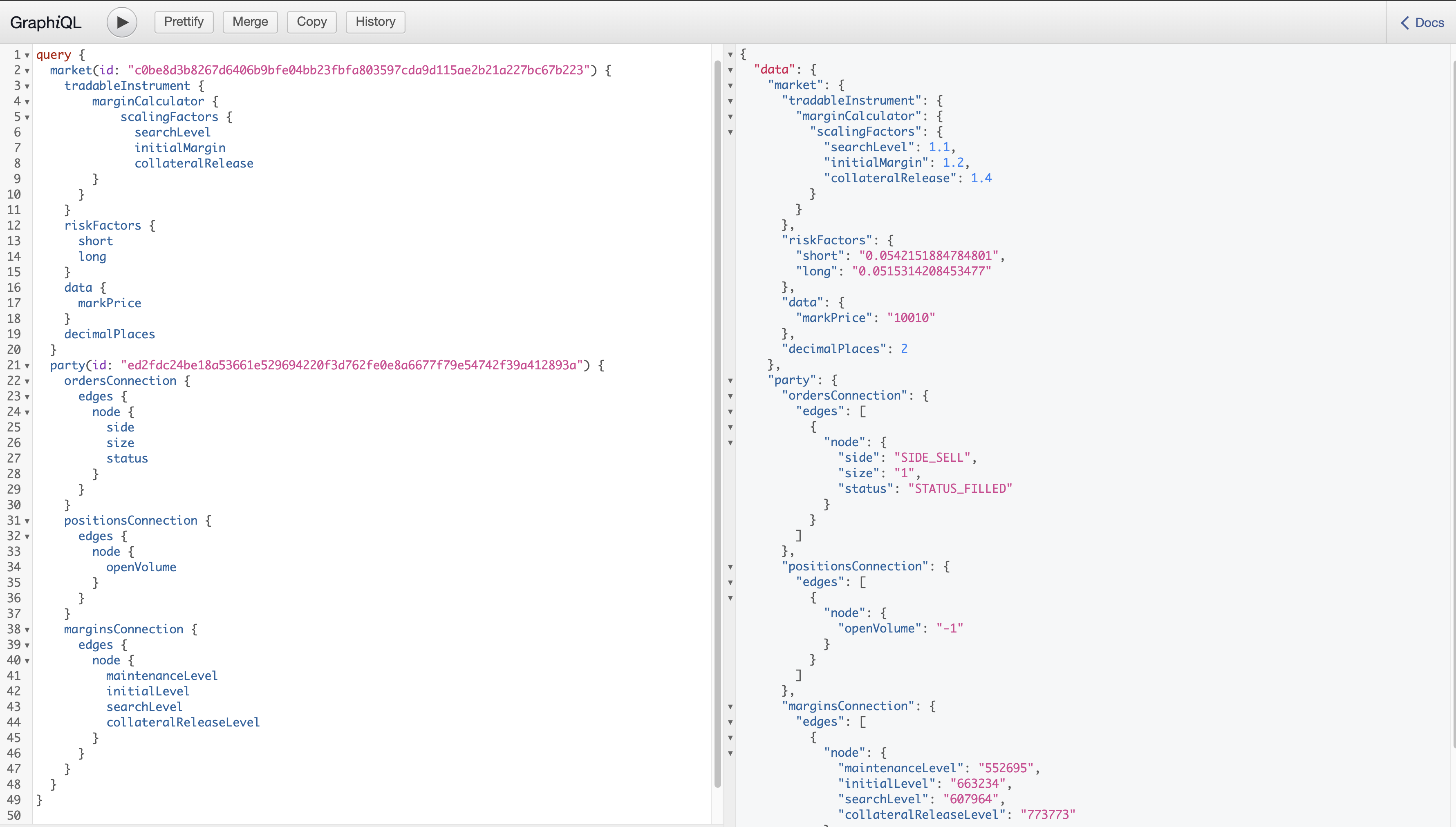